New survey report reveals Spreadsheest as the top malware file type at 34% and 11% increase in threats delivered in Archive.

Wolf Security offers comprehensive endpoint protection and resiliency that starts at the hardware level and extends across software and services.

The report reviews notable threats, malware trends and techniques identified by HP Wolf Security’s customer telemetry in calendar Q2 2022. Highlights include an analysis of the risk posed by CVE-2022-30190, a zero-day vulnerability affecting the Microsoft Support Diagnostic Tool, including campaigns seen in the wild of attackers exploiting this flaw, and the rise of shortcut (LNK) files as a macro-free alternative to executing malware. 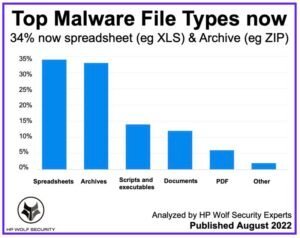 A security incident at Cisco sheds light on how attacks of the future will unfold.

Here’s how it went down:

2. The VPN required MFA for authentication. To bypass this, the hacker used a combination of MFA push spamming (sending multiple MFA prompts to the user’s phone) and impersonating Cisco IT support and calling the user.

3. After connecting to the VPN, the hackers enrolled new devices for MFA. This removed the need to spam the user every time and allowed them to log into the network and begin moving laterally.

There isn’t a silver bullet in cyber security. As organizations roll out defenses like MFA, attackers will find a way to bypass. While this can be frustrating for organizations, it is the reality security professionals live in.

We can either get frustrated by the constant change or choose to adapt and stay alert. It helps to recognize that there is no finish line in cyber security – it is an endless game of survival.

The technology news site BleepingComputer, made the claim about 69 million users being affected, and reported that a hacker had provided a screenshot purporting to show the data stolen includes names, dates of birth, email addresses, postcodes, gender, country and other site- and game-related information. The hacker offered the data for sale on Tuesday, asking for four bitcoins, equivalent to $90,500 (£75,500), it reported.

Neopets has since urged users to change their passwords and promised to provide update as the investigation continues.

WordPress powers 37% of all websites on the internet in 2021. That’s 10% more than in 2016 when they powered only 25% of websites. WordPress powers over 13 times the number of CMS websites compared to Joomla, the second most popular CMS host.

Undertaking a regular website security test of your WordPress website is critical to ensure any vulnerabilities or malware as fixed.

An example of this is hackers have reportedly scanned almost 1.6 million WordPressn websites in attempts to exploit an arbitrary file upload vulnerability in a previously disclosed buggy WordPress plugin.

The vulnerability targets Kaswara Modern WPBakery Page Builder Addons and, if exploited, it would allow criminals to upload malicious JavaScript files and even completely take over an organization’s website.

How to Secure Your WordPress web Site

Security giant Entrust has finally confirmed its internal IT systems were breached back in June.

Entrust has reluctantly admitted the  databreach, resulting in the theft of essential corporate data. The breach impacts the DOJ, the DOE, and the USDT, among others major organisations.

It wasn’t until July 26th that the breach was publicly confirmed when security researcher Dominic Alvieri tweeted a screenshot of a security notice sent to Entrust’s customers.

The responsible group operation relied on the trusted network of network access sellers to obtain initial access to Entrust environment which led to the subsequent encryption and exfiltration exposure via a known ransomware group.

Whether a ransom has been paid or not is currently unknown.

Entrust stated “We have determined that some files were taken from our internal systems. As we continue to investigate the issue, we will contact you directly if we learn information that we believe would affect the security of the products and services we provide to your organization.” – Entrust.

We use cookies on our website to give you the most relevant experience by remembering your preferences and repeat visits. By clicking “Accept All”, you consent to the use of ALL the cookies. However, you may visit "Cookie Settings" to provide a controlled consent.
Cookie SettingsAccept All
Manage consent

This website uses cookies to improve your experience while you navigate through the website. Out of these, the cookies that are categorized as necessary are stored on your browser as they are essential for the working of basic functionalities of the website. We also use third-party cookies that help us analyze and understand how you use this website. These cookies will be stored in your browser only with your consent. You also have the option to opt-out of these cookies. But opting out of some of these cookies may affect your browsing experience.
Necessary Always Enabled
Necessary cookies are absolutely essential for the website to function properly. These cookies ensure basic functionalities and security features of the website, anonymously.
Functional
Functional cookies help to perform certain functionalities like sharing the content of the website on social media platforms, collect feedbacks, and other third-party features.
Performance
Performance cookies are used to understand and analyze the key performance indexes of the website which helps in delivering a better user experience for the visitors.
Analytics
Analytical cookies are used to understand how visitors interact with the website. These cookies help provide information on metrics the number of visitors, bounce rate, traffic source, etc.
Advertisement
Advertisement cookies are used to provide visitors with relevant ads and marketing campaigns. These cookies track visitors across websites and collect information to provide customized ads.
Others
Other uncategorized cookies are those that are being analyzed and have not been classified into a category as yet.
SAVE & ACCEPT